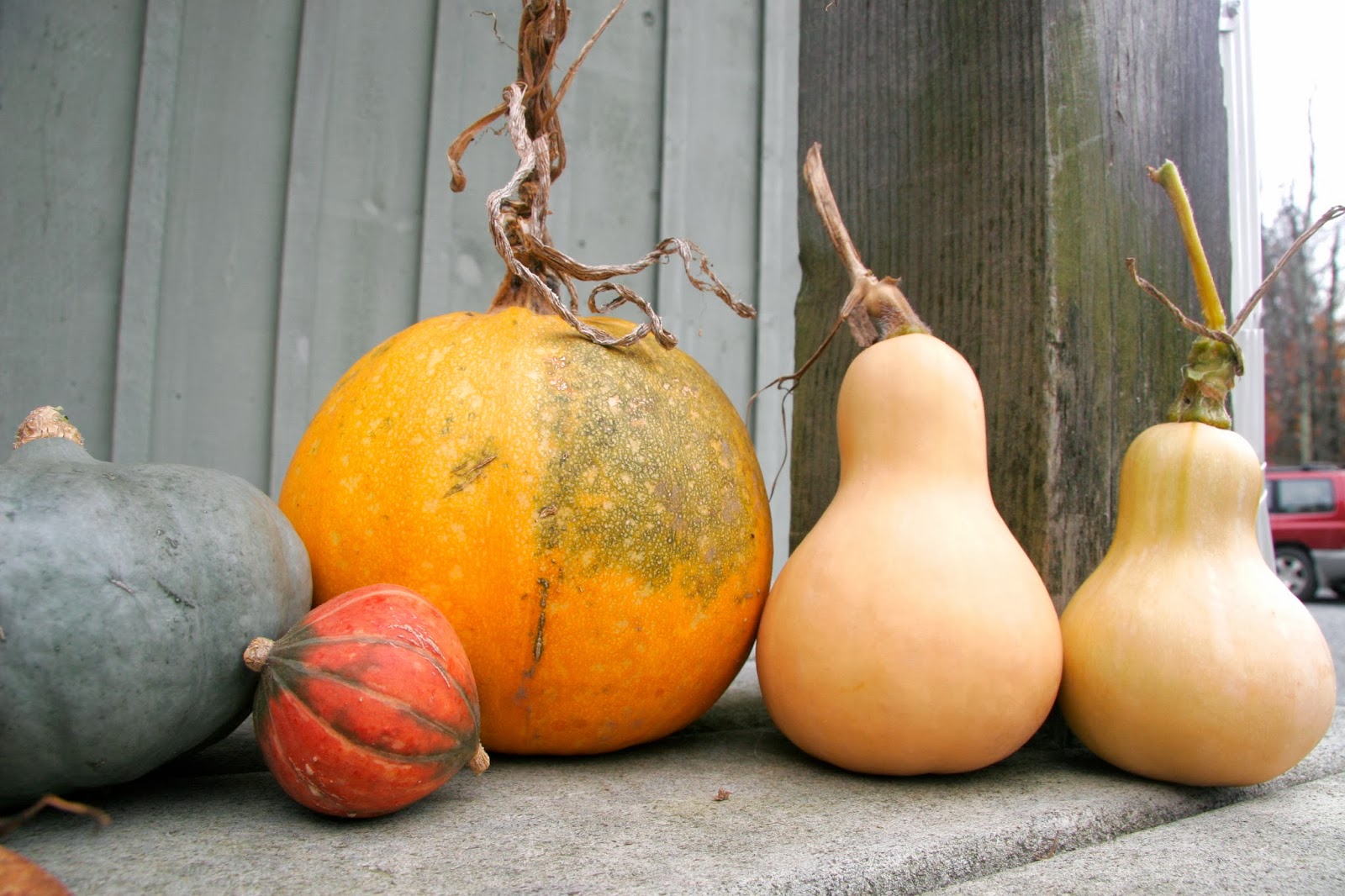 The first frost came in the small hours of the morning. When we woke, there were the tell-tale signs along the edges of the yard. The color seemed a little brighter, and the ferns were all brown and black, instead of the orangey gold of the day before. The basil gave its last, alone and unseen, some time in the night. All that remained were some black stalks, and a few withered leaves, the edges curled.

If I sound a bit melancholy, well, that's because I am. I went out this morning and picked every last tomato, green and ripe alike. I'll be honest, picking those heirloom yellow pear tomatoes, still green, almost brought a tear to my eye. I'd like to say that I have mixed feelings on the subject, that the pain of no more tomatoes was balanced by not having to weed, but it just wouldn't be true. The carrots were all gone a week ago, the green beans almost a month, and I felt the same way. The fact that the first frost is two to three weeks late this year just seems no compensation at all.

The season is changing, and the house and yard smell of fall. The whiff of wood smoke, the dry rotting smell of fallen leaves, the sharp and faintly spicy smell of freshly dug onions, and underneath it, the sweet smell of apples, ripening in their bushel boxes in the kitchen. I came in after puttering and picking to the rich smell of pork and beans in the crock pot, loaded with maple syrup and onions. The sweet fatty taste was exactly what my body craved after working outside on a crisp morning. It was made all the more seasonal with a glass of cold apple cider. 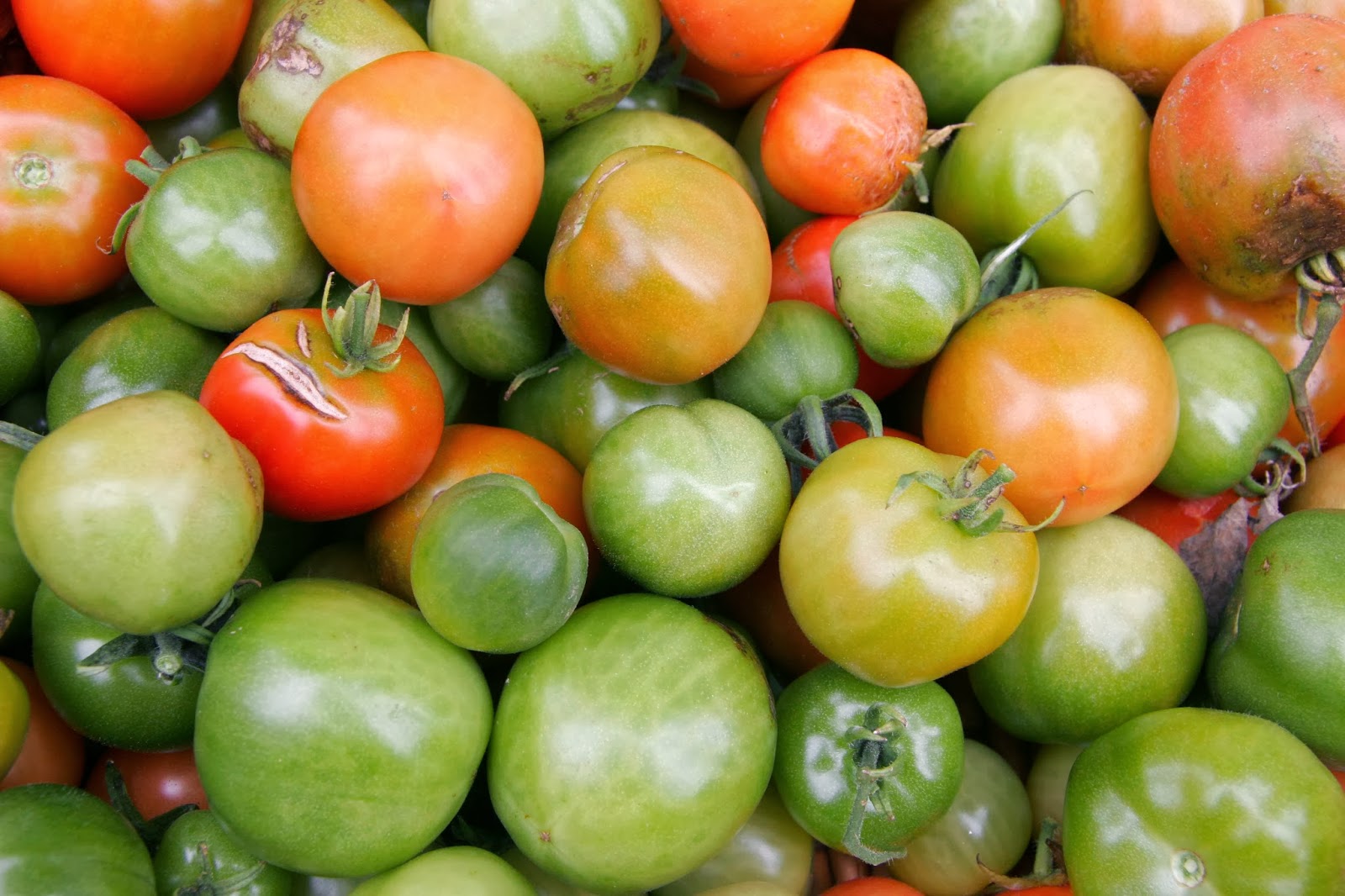 So now what to do with the last of the garden riches? Well, none of the winter squash
were what one could call prize winning. It fact, I do believe they are the smallest specimens I've ever seen. It caused Shawn and I to smile nearly every time we checked on them this summer. The two tiny butternut squashes are definitely destined for soup, probably this weekend. The tiny mystery pumpkin (I swear, we didn't plant one!) will likely meet the same fate. As for the others? Only time will tell. Until then, they will keep nicely in the basement. The tomatoes will be sorted. Those which have started to ripen will be left on a sunny counter to do so, then be sliced and dried. The rest will be made into green tomato relish.


This feels almost like the reading of a will. What is left at the end must be taken stock of, and disposed of to its proper place and use. In my defense, I am aware that I am being extraordinarily sentimental. But I have so deeply enjoyed having a garden again this summer that it feels like I'd like it to go on forever. Nothing does, however, for if it did, how would we ever appreciate it? But still... the soul sighs for sweet, fresh tomatoes, the sharp bite of basil, warm breezy days, and the drone of crickets.

I do enjoy the things of fall, just as much as those of summer. I love sitting and knitting by the fire, and wrapping myself up in wool and cashmere, long walks with the dog in the crisp air, not to mention all of the glorious color. And there are the apples still, coming in to the house from a local orchard at regular enough intervals to make me feel like a little momma squirrel. They are waiting in their boxes to be made into apple sauce, apple butter, fruit leather with cinnamon, and dried apple rings. But today I need to put up relish with the last of the green tomatoes. So I'll take a deep breath, and step out of the last of summer.
Posted by Unknown at 3:59 PM No comments:

Homemaking as a Political Statement

I know that I should probably stick to recipes, and stories about my family, but as our Federal Government has spent the last two weeks partially shutdown, I find I just cannot resist speaking up about something. I promise, this is actually completely non-partisan in nature.

I've spent the last couple of weeks talking to some very worried folks. The government shut down has affected a lot of families, and has made even more families uncertain about their long-term security. Even though I fully expect that by the time this is published everything will be back on track, a lot of damage has already been done to the economy, and even more damage has been done to people's faith in the continuation of our economic system. The way it works is that the Federal government borrows money, and then lends it to banks, who in turn lend it to businesses large and small. For most people, that means that their ability to put food on the table relies on a grocery store, and that grocery store relies on the Federal government being able to borrow money, and lend it cheaply. I have no intention of discussing how we got here, and I'm equally uninterested in pointing fingers. But folks, this is the reality for most of us.

The thing is, I am a homemaker, and my job is to keep my family safe and warm, loved and fed. Because that is my only job, I have what is often seen as the luxury of time and energy to pursue it. My occupation is seen as a bonus, a boon to my family, an appreciated, yet essentially unnecessary vocation. But what if it isn't?

I have a house full of food. I also have an entire winter's heat stacked neatly in my basement. These two things represent an entire summer and fall of hard work. Work so hard, in fact, that I haven't been writing, or even checking my email much. I have gobs of new recipes and techniques to share, not to mention a new knitting pattern, and I will get to that soon now that the season is winding down, but today I really want to talk about homemaking and economics. And I want to do so by committing an enormous faux pas. I'm going to talk about money and politics. Not on a National scale, mind you, but on a very personal one.

Let me preface this by saying that it is a gross generalization, and I make no judgments or recommendations for how other folks run their households. With a second income in my household, some things would be easier, it's true. But that money is more likely than not to be used. Very few couples or families end up putting the whole of one person's income into savings. It's the nature of money, it gets spent. But what if a second person's efforts can be almost entirely converted into savings, by their very nature? In my family, my husband provides a monetary income, and I provide for a share of the necessary household outlay, such as tending a garden and a few livestock animals. This puts food on the table, and reduces the grocery expenses, both by providing free food, and by avoiding the cost of convenience food. Now, that doesn't take up all of my time, and neither does it exhaust the produce we get out of the garden or from local farmers (it's much cheaper to buy in bulk, and in season). So when I preserve food, and store it away for the coming year, it converts the rest of my efforts into direct savings. Those things represent wealth more concrete than money in the bank, as it is food that we don't have to buy later, and gathered and stored at a much lower price. At the same time, my job requires no expenses for child care, travel expenses, or a second wardrobe of work appropriate clothing. In addition to that, I handle all of the bookkeeping for the household and farm, and ensure that we aren't caught short, and that our monetary income is used to its best effect. My income, in real terms, without any nonsense claims of having to hire a bookkeeper, gardener, chauffeur, cook, or house keeper, is something in the neighborhood of $30,000 per year. That's how much money it would cost my family for me to get a job, which means that I would have to earn that in take-home income, AND still do laundry, household bookkeeping, cooking, cleaning, mending, home maintenance, errand running, research, and any hiring of contractors that still has to be done – just to break even.

Now all of those economic benefits of homemaking have been touched on before, and by those much wiser than myself. The cost benefit analysis of staying home has been done to death, and I do believe I've been clear about my situation and feelings on the matter. What I really want to talk about it this. My income is not dependent on the Federal government. The savings generated by my labors are not subject to the stability of the banking system. As a matter of fact, in the case of a poorly performing or even failing economy, my labors, stacked neatly away in gleaming jars and vacuum sealed bags, carefully tucked into the freezer and nestled into bushel baskets, can only increase in value. Even in a booming economy, my savings do not actually lose value. Everyone needs to eat.

When you add to that the fact that I simply cannot lose my job, cannot be fired, furloughed, laid off, or downsized, it adds yet another layer of economic stability to my family. And that's really the heart of it. Stability. I can talk about money, and income, and cost benefit until I'm blue in the face. But the truth of the matter is that even if the Federal government shuts down again in January or defaults in February (which it seems no one can rule out at this point), we will still have months of food and heat stored in the house. My family doesn't have to worry as much about the price of food, because our food is not as dependent upon Federal politics nor world economics. How do you put a price on that? How do you measure that kind of stability as part of the GDP?

You don't. As a matter of fact, I am a scum-sucking drain on the GDP, and everything I do makes it worse. That's really something that bears discussing. Instead of acting like a momma squirrel, and working my tail off, I could borrow all or part of that $30,000 per year, drive my family into debt, and wreck the family finances. I would then be growing the GDP, and making the economy “better”.

Woah. When did that happen? When did what is financially best for the country become a disaster for American families? When did doing what is financially best for our families become bad for the American economy? And more importantly, how do we fix that? I don't really know the answers to these questions. I am neither an economist, nor an historian. But I do know that these are things that we should be talking about. I also know that I am going to continue to do what I believe is best for my family and my local community, even if that means not doing my part for the economy as a whole, or at least not in a way that can currently be measured. I will continue to design my life with the goal that no one will be able to make a stand or a point with my family's economic security. Does that make me a radical? Yeah, maybe. A radical homemaker.
Posted by Unknown at 8:00 AM No comments: