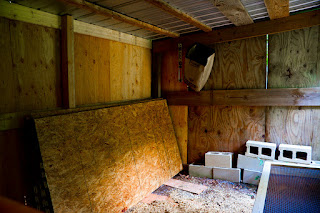 This week we had a big day. The chicken house had finally been deemed as predator proof as it was going to get, and the chickens and ducks were ready to take up unrestricted residence. Truthfully, it was rather overdue. We had decided to rehab a shed that was already here when we bought the farm instead of building new for a number of reasons. Primary was the desire to tread lightly on the earth in general and the farm more specifically. But I’ll tell you, I suspect it would have been a lot faster to just build a brand new one.

After tearing off what remained of the rotting siding on three sides, putting in a new structural post in the back, and putting in new nailers from the scrap pile, we started re-sheathing it… which considering that it boasted of not one single level or plumb line, nor a single square corner was rather interesting. 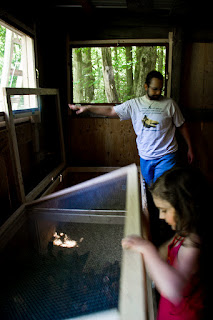 But it got done. Holes were plugged, corners were patched, windows were installed (though the glass in one of them has had an accident already). What remained before the chickens could be moved out of their brooders on the start of The Great Day sounded so simple; take all the stuff out and pour in the shavings.

We still had 12 sheets of strand board intended for the inside sheathing (which would have to wait, much to everyone’s frustration) and two extra sheets of exterior grade plywood inside the house, along with a generator used during construction, and about 15 concrete blocks inherited from the previous owner, not to mention the brooders themselves. So. Out went the poultry, and in went our erstwhile laborers. There are days I think dreamily about being a classic farmwife – milking, cooking, and preserving – and leaving the heavy work to strapping farmhands. But here everyone holds multiple job titles. Hi, my name is Rachel, and I am the cook-houskeeper-scheduler-poultrykeeper-dogtrainer-nanny-artdirector-CFO-librarian-gardener-laborer-and educator-in-chief. Nice to meet you. My husband? Oh, he has an identical title. 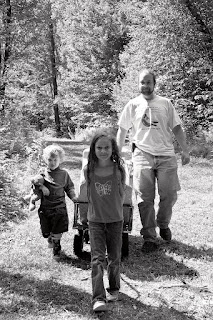 The two of us are not alone. The kids work very hard too. The two of them were in charge of the shavings, and our resident chicken whisperer was hard at work moving the poultry… one by one. Shawn and I meanwhile moved every bit of construction material, scrap, and leftover (including a sparkplug, of all things) out of the poultry house and stacked, piled, or trashed it. This took much longer than it might sound.

But emptied it was, and then we started unloading the four bundles of shavings. Truthfully, I should have gotten six, but that’s ok, there’s always next time.
We are using a technique called deep litter bedding. 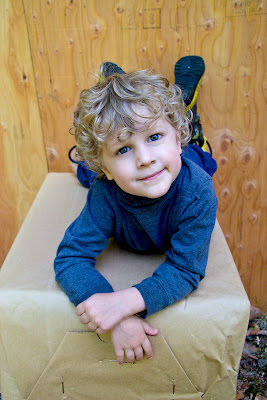 What it amounts to is this – instead of mucking out the henhouse every time it starts to get stinky, you just throw fresh shavings on top. “But oh no!” you might be saying, “That can’t be healthy for the birds, all that bacteria!” Yes, bacteria, and mold, and microorganisms, and parasites, oh my! …And it’s soooo good for them. This technique requires a dirt floor. The chicken house is mucked out once a year, in spring. Then the litter builds up all year, full of droppings, spilled water and feed… and composts. That’s right, it composts right under their feet, and by winter time the compost gives off a significant amount of heat. Enough to keep the chickies and duckies nice and warm. In addition to that studies done in the 1940’s show that mortality rates are lower, and weights were higher. One study in 1947, done by Kennard and Chamberlin at the Ohio Experiment Station, showed that deep litter can meet all the protein requirements of a flock. I have no intention of relying on it exclusively, but it does provide a nice benefit.

So we started with a 6 inch layer of nice pine shavings. We put the waterers and feeders up on some of the cement blocks to keep them cleaner, and then we let the chickens and ducks loose in the house. Judging from the number of contented clucks and wagging tails I would say the new arrangement is a success. In time the interior will be sheathed against the cold, the perches and nesting boxes installed, and the feeders hung from a beam. In time, I tell myself, there will be trim, and paint, and a door much nicer than the plywood currently in place. A fence... power... water. All of those things will come, but as with everywhere, life here marches on with no regard for schedules or deadlines, for it has its own. 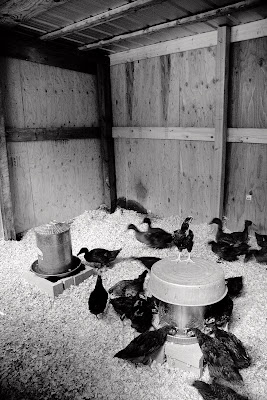