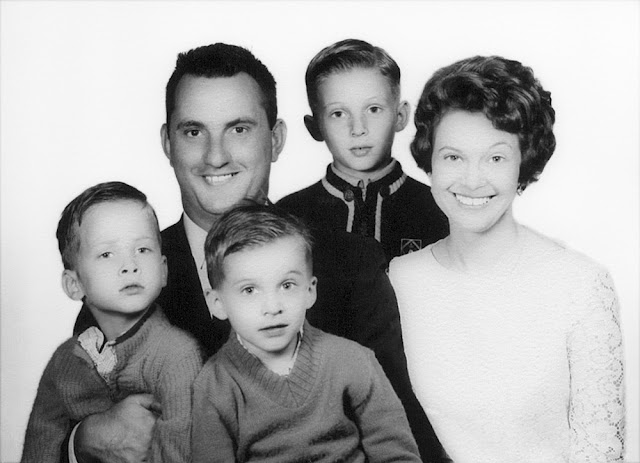 I had a major life event this winter that, until now, I wasn't ready to write about. Truthfully, it has probably been one of the larger contributing factors to my silence here of late. Nine days before Christmas, my Grandmother died. She had been sick for a while, and I thank every agent of providence that I had a few days of notice that her death was imminent. I still remember when the phone rang, I knew before I even turned it over to see who it was. I had dreamed of her the night before, you see. As it was, except for utterly necessary phone calls (you know, the really awful kind) I didn't speak for two days. I loved my Gran. Even now, I'm having trouble typing for the tears. I've been ok for weeks, but all of a sudden tonight, while laying in bed trying in vain to coax myself into sleeping, it hit me again, like a fresh wound. My Grandmother is dead. And she is not coming back.

I feel like a tiny child when I say that. Like somehow the monster under the bed is really real, and now there's nothing left but to face it. And just when I think I've seen the worst of it, the grief wraps yet another horrifying suction-cupped tentacle around me and gives it a good squeeze. I'm not a stranger to death, even the death of a beloved. Indeed it is always like this. And I know from experience that as time passes the grief squeezes me less. The monster loses some of its horror, and in time, the sweetness of memory becomes stronger than the pain of loss.

But this grief follows closely on top of another. The passing of the last of my grandmothers on top of the death of my beloved Great Aunt Nell has me pondering the slow passing of a generation. And though I have no doubt that someone will have to drop a tree on my Grandfather to slow him down, still, I know it is inevitable. As my mother is quite fond of saying, "None of us gets out of here alive." Furthermore, I am thinking about how this sort of thing seems to happen in chunks, one following another, not only deaths, but marriages and births. I had five wedding invitations in one year. Two friends have given birth to beautiful baby girls so far this year. Heaven willing, there will be a third baby born to a family member some time in July. A chunk of friends had babies last year too.

And as my life fills with pictures of precious fuzzy heads (and the sweet bliss of their new parents), and news of the passing of beloved elders, in spite of the ups and downs, or maybe because of them, tonight I am feeling connected. Though the tentacles squeeze hard, I can't help but look at those fuzzy heads and think of what my beloved elders have left behind in me, and what I pass on to my babies of myself and my elders, of what my daughter and son will fill the precious fuzzy heads in their care. I can't help but feel that, somehow, my Gran lives on.

Ah, there's that sweetness.
Posted by Unknown at 2:43 PM