I can now say that I have added a new skill to my repertoire; that of cutting down trees. I was already tolerably familiar with the theory, hard to escape when you live in New England, really. But I have now had the chance to put it into practice. We started cutting for the orchard. It was hard going, and not just because I happened to decide that the best place was amidst a stand of oak trees (I really never do anything small). It is not an easy thing to take a life. I honestly hope that I never get to the point where it will be. A few days before we started cutting, I went around and said thank you to the trees that are going to be giving their lives so that we can eat and prosper. Is that sentimental? I don’t think so. Quite a few of those trees are older than I am. All of them are older than my children. It sort of puts it into perspective. 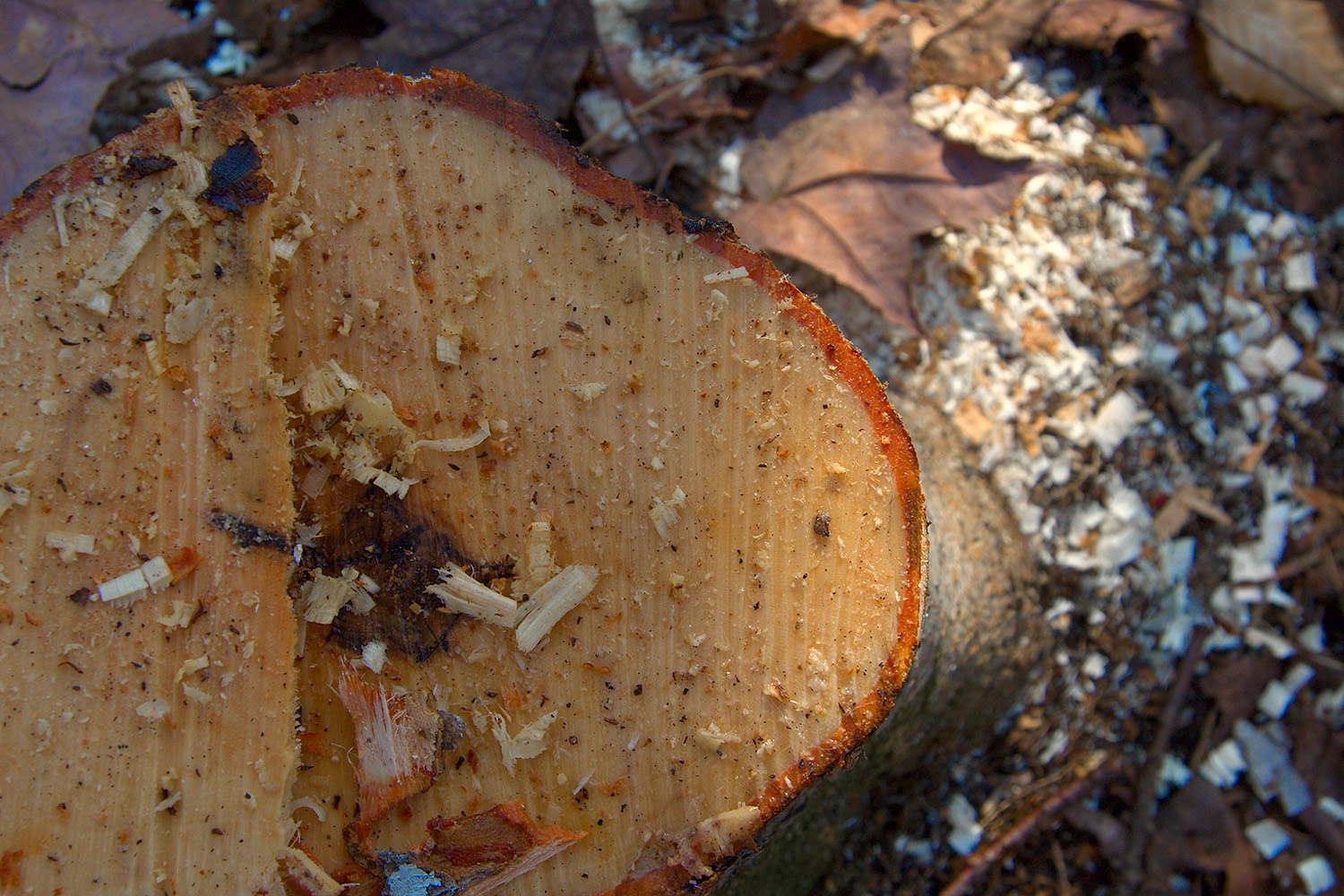 The hope, though, is that the trees I replace them with will far outlive me, and may in fact outlive my grandchildren, if I have any. I dreamed of them, while doing the hard work of cutting down trees and clearing brush. Sitting under apple and almond blossoms in the spring, baskets of yummies in the fall, the pleasure of watching them grow and ripen all summer long. Plumbs, peaches, apples, and pears; made into jams and chutneys, sliced and put up in gleaming jars, dried as slices or fruit leather. Bottle after bottle of homemade wine and melomel. Nuts, hulled and stored, or roasted. Homemade nut butter, which has got to be one of the most delicious things on earth. That’s all a few years down the road, however.

This year, we must work to bring the dream to fruition. Dreams remain only that, until you put in the sweat to make them a reality. And sweat we did, let me tell you. We worked all day. First, we strung a line from marker to marker along the property boundary, to make sure we didn’t cut down any trees that don’t belong to us. It took longer than you might anticipate, as the underbrush is a dense mixture of blackberry bramble and mountain laurel. Then we stopped, and did some math. It’s all well and good to jump in with both feet (and you all know what a fan I am of doing precisely that), but orchard planning requires a bit more in the way of, um… actual planning. We measured, and found that the distance between the driveway and the property line is about eighty feet, give or take the amount of curve in the driveway. Thirty feet of that space (again, give or take) is already lawn. So if we cut back a strip from the edge of the lawn to the property line, eighty feet long, that would give us an eighty foot by eighty foot cleared space for the orchard, with the edge right up against the driveway. If we then gave ourselves a twenty foot border of open space all the way around, to prevent shading of the trees, and keep the fruit from hitting cars in the driveway, that gives us forty feet square; enough for up to twenty-five trees. I have to assume that twenty-five trees will be more than enough. Though, my kids go through applesauce faster than a horde of locusts.

Now, do I really want to cut down nearly 1/10 of an acre of trees and brush all at one go? Frankly, no I do not. Plus, we have to consider the cost. I could afford to put in all twenty-five trees this year, provided that they are all small. In which case, I would spend the next ten to fifteen years waiting for my harvest. Alternately, I can buy a lot fewer trees, but older ones that are ready to fruit immediately - as in this year, or next, depending on how well they transplant. I spend the same ten years building up my orchard, but I get fruit during that ten years. I think I know which way I want to go on this one. So we will be buying six trees this year; two Hall’s Hardy Almonds, one Chicago Hardy Fig, and three apple trees (we are still conducting delicate family negotiations as to which varieties). All of that boils down to the fact that we marked out about half the orchard to cut down. That may seem a lot for only six fruit and nut trees, but some of the trees we have to remove are quite large, and they need to come down in such a way that they won’t wipe out power lines, the house, or our fledgling orchard. Hence taking the time to do the math at the beginning of this adventure.

So with that in mind, we leaped into action. We managed to cut down about thirty small trees, and clear out most of the brush from our forty foot by fifty foot section. I say about, because most of them were the remaining sap-suckers of trees that had already been cut down and left as rotting stumps by a previous property owner. And well, then there are about a dozen large boulders we were working around. Holy hard slogging, Batman. You know, you never realize how out of shape you are until you start doing that kind of work. Three of us worked all day. My aunt and my cousin’s daughter were up visiting, so we roped in the young’un while Auntie kept an eye on children, livestock, and pets. That’s what happens when you come to visit. I’m not shy about putting people to work. I’m also not shy about being grateful, or feeding people, either, so it tends to work out. I’ll tell you, we needed the help. We ended the day with three piles of wood and brush laying in the clearing; one for firewood, one for just branches (I’m going to try my hand at wattle fencing a little later in the year, for the herb garden), and one yet to be trimmed and sorted. The last tree was also left lying where I had dropped it, because I was simply too tired to operate the chainsaw safely. I actually felted a pair of hand knit socks inside my wellies. I had to cut them off my feet. So a nice hot shower, dinner, and bed were all well in order.

I had every intention of getting up early and starting again the next day, never mind that it was a Monday, and Shawn had to work. There was work to do, and I was going to do it myself. I’m a big strong girl, right? Ohhh boy, was I ever wrong. The next morning, I felt like a ninety year old lady who had been through the trash compactor. I whimpered just getting out of bed. Chainsaw? Not going to happen. I could barely lift my water bottle. Couldn’t I just do laundry instead? Um, I couldn’t even touch my toes, so… maybe not. Look up over-do in the dictionary. You’ll find my picture.

So I settled down with my knitting, all the while grumbling about the fine weather, and not being able to work in it. At least I could replace the pair of socks that had been sacrificed. I could always get back to clearing for the orchard tomorrow, right? Well, as it turned out, the next day it rained, and not a little bit, either. I think we got something like an inch and a half of rain. The ducks were happy, but I was muttering under my breath. So, I spent the day wrestling with the household budget, trying to bring everything into order before our fiscal year (which starts June 1st) comes to an end. I wasn’t very successful. It seemed like every small thing that could go wrong, did, and every tiny task took ten times longer than it should have. It was one of those days. I usually have them when I am struggling with the inevitable, instead of surrendering to it. BUT THAT’S OK, because I was going to get outside and start moving my way through those brush piles and stacking the firewood in the morning, by hook or by crook.

Well folks, I got up this morning to an entire yard covered in ice, and a two hour school delay. Seriously??? It is SPRING dangit. Someone up there is having a pretty good chortle at my expense, I must say. So today I’m going to knit, and wrestle with financial information. I will not be so foolish as to try and work on ice-coated trees. I will also try and take this delay in good grace. Because at least there is always tomorrow…
Posted by Unknown at 8:00 AM